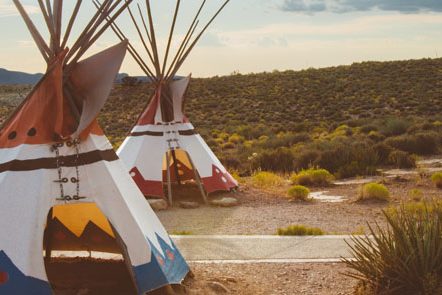 We attended Chris Stapleton’s “All American Road Show” tour on its stop in Darien Lake, on a muggy July Sunday night in upstate New York.

Chris Stapleton welcomed us into his “The 78” traveling lounge to have some of his favorite whiskeys, play his guitars, hold his awards, and relax before an eclectic night of Country and Americana music.

A good way to entertain your guests (when your biggest hit is about Tennessee whiskey) is to ply them with a bunch of actual Tennessee whiskey !
Ironically, I lost track of myself in the 78 lounge and didn’t write down what we were drinking, but they assured us that the two were Chris’s favorite bourbons.

After the VIP tent fun, we headed into the venue to check out the openers:

As a tight 4-piece, this roots sounding band delivered a dynamic opening set of solid country tracks full of 3 part harmonies and big toned guitar solos. Check them out on their own tour after this one. It is worth noting that Brent Cobb has also written songs for a variety of country artists including, Luke Bryan, Kellie Pickler, Kenny Chesney, Miranda Lambert, Little Big Town, and others. A huge talent to see as a opener.

This band is crazy good. From the minute that their set began, the energy was high, and the stage movement erratic. The Band was physically huge: rhythm section, Horns, Organ, flashy Leon Russell looking lead player, and all of them supporting Anderson himself.

This band is a big risk for Chris Stapleton to book as support, BUT it makes sense as Stapleton fans like their southern Rock, soul, and R&B sounds as well. And this is a killer R&B band that pleased the crowd, and pulled all the James Brown Soul show stopping stage antics out of the bag.

Worth noting: Anderson is the literal son of a preacher man, and the beau of Miranda Lambert, who came on stage to sing him happy birthday (he was turned 30 the next day). He could easily break out as a crossover Americana star; and he certainly knows how to work a crowd.

I will admit, I didn’t get into Chris (although I liked him after his 2016 Timberlake performance) until a few months ago when he was on the Howard Stern Show. check out the interview. Since then I have been a fan.

This show was surprising in many ways. First of all, Chris is a minimalist. His lighting was subtle and modern. A half dome of factory lights in front of a texted wall of multi-layered bricks. You never saw this guys face. Hat down, no under lighting. At first it was shocking, but he held the crowd of rabid fans with songs, loved by all, and almost entirely memorized.

His band was even more minimal. Drums, bass, Chris on guitar and vocals, and his wife on background vocals and percussion.

But it worked because this guy is no frills and honest. He turned a huge outdoor venue into an intimate, personal, and impactful performance. Every word had impact and his band seemed as if they were in a small room, enjoying the perfection of their own creation. The highlights were obvious, (the hits), but everything else had the same energy.

Miranda Lambert came out again and the place went even crazier.

During the entire show, waves of thunder and lightning storms came through the area. The massive general admission crowd loved it, and didn’t move an inch. The effect was magical.

Thank you to Daniel DeBlanke of the three-piece soul band, Bombay Beach Revival, for his review of Chris Stapleton’s “All American Road Show” tour. Follow Bombay Beach Revival on Facebook and check out their music on the Country Clones Spotify playlist.